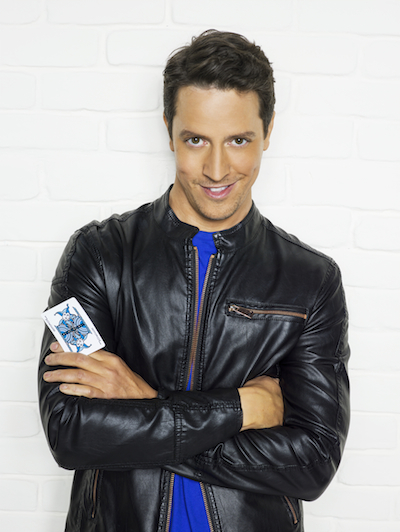 Andrew Mayne is an Edgar nominated author, Thriller Award finalist, star of Shark Week and A&E television’s Don’t Trust Andrew Mayne.
A best-selling novelist and magician, Andrew Mayne has performed his unique brand of illusion on five continents, his YouTube videos have millions of views and he’s cultivated thousands of fans for his magic, books and podcasts calling themselves ‘Mayniacs’.

Taking magic in a new direction, Andrew created his own style of magic called “Shock Magic”; combining the impact of large scale illusion with the in-your-face approach of street magic. It’s fun, it’s irreverent, it’s the next evolution in magic. Andrew’s effects range from making ghosts appear on cell phones, shrinking himself to one foot tall and making a town think they were besieged by UFOs. His magic has even been performed for astronauts on the International Space Station! Andrew has invented over 400 magic effects and published 45 books and videos on the art of illusion. On the leading edge of magic and pop culture, he was among the first to invent magic for the iPhone (even before there were apps) via his website iPhoneTrick.com – that’s since been performed on millions of people.

He’s worked behind the scenes creatively for David Copperfield, Penn & Teller and David Blaine. In 2011 Andrew was invited to China on behalf of the legendary Beijing Circus to share with Asia’s leading magicians his modern approach to illusion. His 2012 tour brought him to Europe and the Middle East.

Andrew started his first world illusion tour while he was a teenager and was soon headlining in resorts and casinos around the world. With the support of talk show host and amateur magician Johnny Carson, Andrew Mayne started a program to use magic to teach critical thinking skills in public schools for the James Randi Educational Foundation. Andrew’s Wizard School segments, teaching magic and science to children, aired nationwide on Public Television.

Andrew is the author of over a dozen novels and has been nominated for the Edgar Award for Best Paperback Original (Black Fall) and the Thriller Award for Name of the Devil. His recent novel, The Naturalist is an Amazon Charts best-seller and spent six weeks at the number one spot for all books on Amazon.